Social media followers - what does it really mean?

“They’ve got more of a social media following than us” - a line I’ve heard more than a few times from brands when asked about the trajectory of their competitors. For as sure as it may be true, I don’t think anyone I have spoken to actually knows what it means.

Does it mean they’re more successful than your brand? No, as many organisations with smaller followings are more profitable and have posted greater revenue growth than many of the social media sensations.

Admittedly, social media is an alarming phenomenon for businesses and brands, particularly those in the luxury space. As it currently stands, its size, increasing dominance and speed of change makes it feel like an unstoppable juggernaut, one that is essential to be attached to, lest you be crushed in its wake.

After all, at this level you’re selling a dream, a fantasy. You’re selling a lifestyle that’s entwined with your brand promise that consumers get a kick from. You’re the pied piper of your own destiny and that means that a massive following is what matters most of all. And the bigger, the better.

But is that actually true? He (or she) with the biggest horde, wins?

Certainly, the internet is replete with this fairly basic analysis of brands’ social media success: ‘Here are the most followed brands on Instagram’, ‘Luxury brands dominate top brands on social media’ etc. But what if you scratched just one layer deeper? Wouldn’t it depend, for example, on how established the brands were? Or what their year on year commercial performance has been? Or even something simpler –how many customers or sales they actually had in a given year?

It was this thought that provoked Barton to produce a very simple index on the luxury car industry, a sector strongly dependent on visual imagery, kerb appeal and marque reputation – and one which is therefore exceptionally well suited to social media channels, and Instagram in particular.

We took a selection of thirteen luxury car brands (see table 1 below). If you rated their performance on Instagram following alone, then BMW would be the king of the road with over 22 million followers, followed fairly closely by its main rival, Mercedes-Benz with 21.6m. But neither of these brands are bona fide ‘exclusive’ luxury marques as they also make many relatively affordable models. So, surely it must be Lamborghini that is crowned the real top dog with 21.4m followers (the third highest)? Particularly as it sells a fraction of the number of cars that Mercedes-Benz and BMW sells, so is undoubtedly more exclusive?

What is the ‘dream factor’?

And this is where it gets interesting. For if you measure the number of social media ‘fans’ (Instagram followers) against the total vehicle sales, you end up with a noteworthy calculation: the number of followers per vehicle sold each year: we have called this the ‘dream factor’ (see Table 2).

When you look through this lens, Mercedes-Benz and BMW sink to last and second-to-last places respectively. Both sell over 2 million cars a year, and each sale represents around 10 followers.

Land Rover, owner of the original luxury SUV champion marque Range Rover, fairs a little better, but not much. Whilst it only has 6m followers, it sold 411,875 cars last year with each sale representing 14 followers.

It’s a big jump up for sister brand Jaguar though, which not only has more followers on Instagram (10m), it has also gathered these on lower sales: Jaguar sold 180,833 vehicles in 2018 meaning around 55 followers per sale. But then again, Jaguar has always been a more enticing ‘fan’ brand than Land Rover, despite the glamour that Range Rover has brought to it. 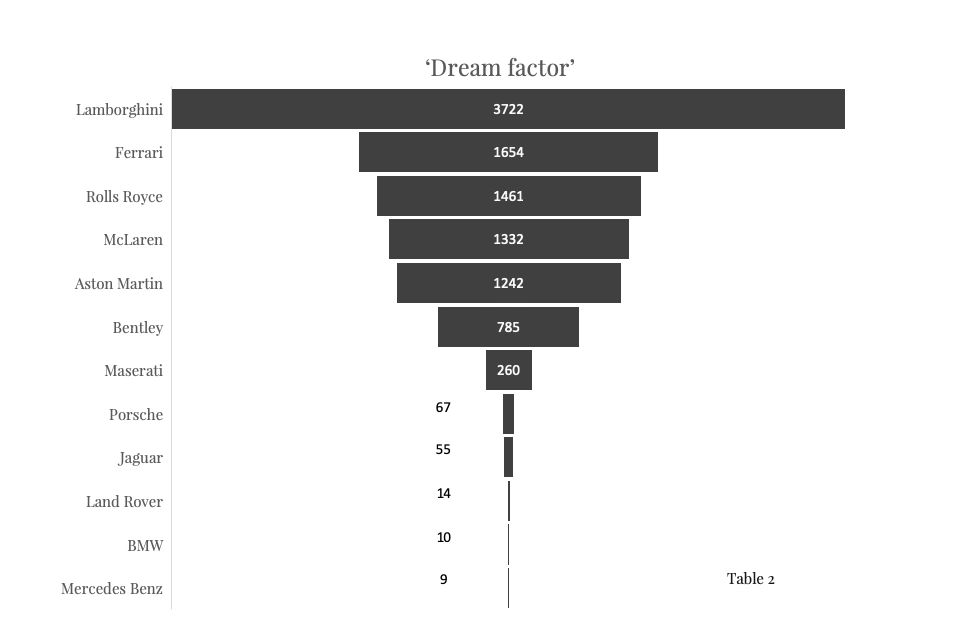 Next on the list is Porsche, which despite being far more of an all-rounder brand these days, is top of its weight class in the ‘dream factor’ with an impressive 67 followers per sale. Though it sold over a quarter of a million cars (which is an enormous total for an exclusive brand), it has a massive 17.2m followers which gives it an impressive return.

Maserati hasn’t been doing well. It’s on a very low ebb of 36,500 global sales in 2018, down 21% from the previous year (whereas many of its competitors are increasing sales) so it seems wrong to look at its impressive ratio of 260 followers per sale as a sign of strong performance. If these woes continue, expect a bit of a dent in their impressive total of 9.5m Instagram followers: you’re only going to attract customers if they know you’re what others want.

The rest of the marques are what we would call the Elite Marques, as they all sell fewer than 10,000 cars each year. With a global population of over 7.7bn, that means they make vehicles for a tiny 0.0001%.

With this in mind, you’d expect the number of followers to drop off significantly, but as we know that’s just not the way luxury works – and it certainly isn’t the way it works in luxury automotive, where fans-who-never-buy are part of the brand story. They energise actual buyers into buying because they believe they are fulfilling a fantasy that is shared by many others. This is the collector syndrome transposed onto the luxury market: the more something is coveted, the higher you perceive its value.

Bentley have over 6.5m followers on Instagram, despite only selling 9,560 cars a year. This gives them a total of 785 followers per sale, which gives them a significantly higher ‘dream factor’ than the previous marques mentioned. However, this is well behind fellow British brand and James Bond favourite, Aston Martin which has 8m followers and global sales of just 6,441 cars, giving it a strong 1,242 followers per sale.

Next up the list of the Elite Marques, although closer this time, is another British brand, McLaren. Whilst it only made 4,806 cars last year, it has a strong 6.4m followers on the ‘Gram, which gives it a ratio of 1,332 followers per sale.

A little higher and we find Rolls-Royce, which while commonly associated with chauffeur driven sedans is effortlessly ‘shaking off’ a long-established older-man image with its Wraith and Black Badge models, not to mention its outrageously successful debut of its first SUV, the Cullinan. Of the Elite Marques (and indeed all of the thirteen marques in this list) Rolls has the smallest Instagram following at 6m. However, given it makes just over 4,100 cars a year, this means it has an impressive 1,461 followers per sale.

However, this is around 200 followers-per-sale lower than Italian powerhouse, Ferrari. The Prancing Horse made almost as many cars as Bentley last year (9,251) but it has double the Instagram following at 15.3m, giving it a ratio of 1,653 followers per sale.

Despite Ferrari’s brand power and its alluring image, its own Instagram following is well behind that of Lamborghini, which only sells just over half the cars that Ferrari sells (5,750), but notches up over 21m followers, meaning a massive 3,722 followers per sale. Lambo only sells around 0.25% of the vehicles that BMW and Mercedes Benz sell, but it has a similar social media following, which means it has a giant ‘dream factor.’

However, even the mighty Lamborghini is humbled by Bugatti (which is excluded from the table). Whilst it has a lower Instagram following of 10.1m, which is equal to Jaguar and well ahead of Elite Marques like Bentley, Rolls Royce and McLaren, its annual sales are consistently tiny. In 2018, a total of 22 new Bugatti cars were sold, giving it a massive 459,000 followers per sale.

Many might dispute that Bugatti is a 'typical' car brand, even at this elite level. After all, it chooses to make a handful of cars and prices them above $2m each and limits each model’s lifetime production to the hundreds, not thousands.

All of the Elite Marques are challenged by the concept of brand dilution, as their demanding prices bring a natural expectation of rarity. Whereas Mercedes and BMW duke it out for ever greater sales and revenue, the likes of Bugatti are testing other limits: achieving production vehicle performance records, making ultra-exclusive one-off vehicles, creating a mindboggling ‘dream factor’ around the brand.

This ‘dream’ – carefully cultivated over multiple lifetimes – then becomes its stock in trade. It’s not about how many people are following you – it’s about why they are following.